Invention of the Telegraph

In the 1830's and 1840's Samuel Morse and others invented the Telegraph, a system which revolutionised long distance communication. It worked by transmitting an electrical signal over a wire laid between stations. Samuel Morse also invented a code (Morse Code) which used a series of short and long electrical pulses to represent individual letters, numbers and characters. In 1844 he sent his first message in Morse Code between Washington DC and Baltimore, Maryland. Long distance communication had become a reality! 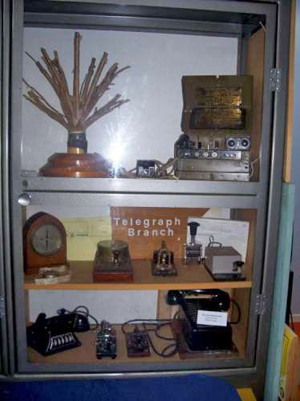 For the young Colony improved communications services became a priority and the development of telegraph technology was rapidly taken up. By 1866 many telegraph services were installed, though as a mix of private Provincial Government lines and a national Government trunk service. The trunk service was installed by the Electric Telegraph Department.

The Postmaster-General's second report to the General Assembly in 1866 advised that a national Government telegraph line extended the length of the 'Middle Island' (South Island) from Bluff to Nelson. Otago Provincial branch lines ran from Dunedin to Port Chalmers and from Tokomairiro (Milton) to the Lakes (the Otago goldfields). In Canterbury a Provincial line ran from Christchurch to the West Coast goldfields and a line between Christchurch and Lytellton had been purchased from the Canterbury Provincial Government.

In the North Island a military telegraph line ran between Auckland and the Waikato and consideration was being given to extending a line northward from Wellington to connect with this service. There was great inconvenience experienced by the Department and public generally because of the divided management of the telegraph lines of the Colony.

In August 1866 an underwater cable was successfully laid in Cook Strait linking the two main islands. In 1872 the Auckland to Wellington line was completed.

In 1876 New Zealand had its first international connection when a trans-Tasman telegraph cable was laid between New South Wales and Cable Bay, Nelson. A second trans-Tasman cable was laid in 1890 and in 1917 both cables were altered to land at Titahi Bay for an improved Wellington connection. In 1932 a composite of the two cables was relaid to Muriwai beach, Auckland. In 1963 when the COMPAC cable was commissioned this saw the Trans-Tasman Telegraph Cables being abandoned and the end of national Telegraph (Morse) services.

In its early days many people were required to enable telegraph communications to take place. The Telegraph Service included clerks to record your message on paper and accept payment for the service, Morse Code operators at each end of line circuits to send and transcribe the information, then telegram delivery boys were employed to cycle to the recipients address and deliver the message.

Inevitably there came a demand for automation of telegraph services and this first occurred in 1921 with the establishment of a machine printing service between Wellington and Christchurch. The service was 'multiplexed' which meant that four messages could be sent in each direction simultaneously on each circuit. This system stayed in service for about 30 years.

Equipment evolved and in 1929 faster and more modern teleprinters were introduced for service on point to point lines. This was of great benefit to the Press Association, businesses and Government Departments. Teleprinters operated at 50 baud or 50 bits per second (bps) which is very slow by comparison with later data speeds. However, it equated to about 60 words per minute (continuously) which was faster than the 20 -25 words per minute an average Morse Code operator could comfortably manage. It was also possible to use the Teleprinter to punch up a perforated tape containing the message. The tape could then be fed into a tape reader so the message could be sent at top speed, thus reducing the time a circuit was in use compared to that of a 'hunt and peck' operator typing the message online.

In 1964 the leased teleprinter market grew substantially because of the introduction of a national automatic Telex exchange service where other Teleprinter machines could be contacted by dialing their Telex number. When modern data modems became available operating at 300 baud a faster Datex service was also introduced, though Telex services were beginning to give way to other technologies by then.

The Gentex service was established for use by anyone who didn't have a Telex machine. To send a message you went to a Post Office, wrote down your message using as few words as possible and paid for the message by the number of words being sent. The message would be given to a Gentex operator who sat at a Gentex (Teleprinter-like) terminal, typed up your message and sent it over a network to the nearest Gentex office of the message addressee. At that office the message was printed out on one long thin strip of tape. The receiving operator cut this tape into sections and pasted the strips onto a yellow form to make up a Telegram. If a telephone number was available the recipient was then called and the message read to the person over the phone. Ultimately the telegram was placed in an envelope and given to a delivery boy to take immediately to the addressee.

Teleprinter-based services are no longer commercially profitable, being replaced by either Facsimile transmissions or by Internet-based communication. Facsimile machines effectively transfer a black and white picture of a document over a telephone line. This has the advantage that a form can be faxed to a customer, they can hand enter details on the form, sign it and fax it back to the originator, thus authorising a legal commitment. Internet services using a scanner and a personal computer create a pseudo-fax service with the same benefits.