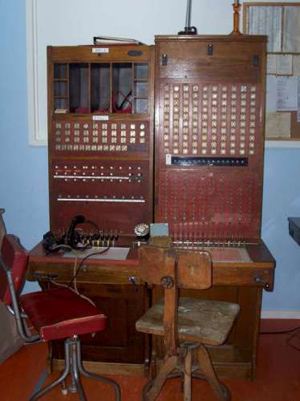 Alexander Graham Bell made his historic first telephone call in March 1876. The simplicity of telephone calls became immediately apparent because a telephone could be located in a home or office so you didn't have to visit a Post Office and to communicate you simply talked into an instrument - you did not have to learn Morse Code.

In its October 6, 1877 edition, Scientific American magazine published an article entitled 'Bell's New Telephone'. The information in the article allowed knowledgeable individuals to experiment with telephony, hence the first users of the telephone in New Zealand were those people who built their own instruments. While private telephone attempts are likely to have been attempted earlier, by an amazing coincidence two publicly recorded trials were conducted in New Zealand on the same day, 1 February 1878. Mr Charles A. Henry, an electrician, conducted a trial in Dunedin using coils of wire simulating a 400 mile long telephone line. On the same day in Tauranga Major David Scannel and a group of gentlemen conducted telephone trials over 40 yards (36 metres).

On the following day Charles Henry organised a 'talking telegraph' trial. He connected his home-made telephone instruments to the existing telegraph line at Dunedin and Tokomairiro (Milton) Post Offices some 57 km apart. The newspaper report of the trial was very enthusiastic about the clarity of the call and the promptness of responses to questions.

An early use of telephone service was highlighted by the communications issue faced by Messers Cargill and Anderson, owners of the isolated Teviot Run station. The homestead was located some nine kilometres down-river from Roxburgh, but across on the eastern bank of the Molyneux (Clutha) River. Additionally, the station punt needed a skillful operator to manage the difficult river crossing safely. An 1874 effort to improve communication was by the installation of a single-wire telegraph line between the homestead and Roxburgh Post Office, however there were ongoing issues with employing a skilled operator to manage the telegraph station at Teviot Run. Following the telephone demonstrations in Dunedin by Charles Henry in February 1878 a telephone system had been ordered and was installed by mid February 1878. At the first test call Postmaster Thomas Coop, his wife and 4-year old daughter Sarah were present in Roxburgh and a girl, Jessie was at Teviot Run. Mr Coop, his wife and daughter all took turns speaking to Jessie.

The first telephone office was opened in Port Chalmers in 1879 with its first line being between Port Chalmers and Portobello. The purpose of the line was to allow shipping information to be relayed to Dunedin more rapidly.

In 1881 Christchurch opened its first telephone exchange with 27 subscribers and Auckland exchange opened with 26 subscribers. Exchanges in Dunedin were opened in 1882 and Wellington in 1883. A Roxburgh exchange connecting about 80 subscribers was installed in 1918. These would all have been connected to manual operator-controlled exchanges where cords were used to patch one line to another, then be removed at the end of the call to make the lines available for other calls.

As well as the telephone's simplicity of use there was another big difference between telegraph and telephone systems. With telegraph systems a few circuits were connected between Post Offices so relatively few wires were needed. With telephone systems a central exchange had wires that went to every customer's office or home, so many more wires were required. In those early days cable insulation techniques were still evolving so underground cables were uncommon. If used they would have been at a busy exchange to position the nearest telephone poles further away from the building. The normal situation was for exchange connections to be by uninsulated copper wires carried on telephone poles. These bare wires were strapped to insulators mounted on horizontal timber boards called 'pole arms'. Poles near exchanges had many pole arms, insulators and wires and in the 1880's telephone poles were often jokingly referred to as 'Lemon Trees' after Charles Lemon, the General Manager of the Telegraph Department.

Initially it was common for more than one customer (subscriber or 'sub') to share a telephone line, particularly in rural areas where for example, one phone line might provide service to all the farms in a valley. There was no privacy on such a line, as all users could hear every ring on the line and by lifting their handset could listen to any other phone call. A system of coded short and long rings was used to identify who a call was for. The shorter Morse Code letters were allocated first, however on 10 party lines the ring codes inevitably were longer. The ring codes used were A, D, M, R and S for a 5-party line. These were extended by using J, K, U, W and X for a 10 party line. Example ring codes for S, M and W were: S was three short rings; M was two long rings; and W was a short followed by two long rings.

Consideration for others was important. For instance, when first picking up the phone a user would say 'Working?' to see if the line was in use. They would limit the length of their call - say to 5 minutes on a line with many subscribers, then at the end of their call would crank their phone 'magneto' - the ring generator - to make a short ring burst on the line advising the operator and all other users that they were finished and the line was available.

Automation came to the telephone world after the end of the Great War (WWI). The first systems installed between about 1920 and 1950 used 'Rotary' technology, after which 'Step-by-Step' equipment was used. From 1970 the 'crossbar' exchange system was used until it in turn was replaced by SPC (stored program control) computer-based systems in the 1980s. Each change of technology improved the reliability, lowered the maintenance and increased the services available to customers.

By the 1960s New Zealand had one of the largest telephone networks in the world for its population size.

The mechanism for automatically changing connection points in a rotary exchange was one of using a powerful electric motor to turn horizontal steel shafts running along the length of equipment racks. Vertical shafts would extend up from these shafts and interface to switching units. Many motors, shafts and switches went into creating a rotary exchange.

The first rotary exchange was installed in May 1919 at Masterton, followed by the Courtney Place and Wellington South exchanges in October 1919. The last rotary exchange was removed in 1985. Rotary exchanges were manufactured with a reversed-numbered dial and New Zealand retained this dial configuration as standard. This is why we dial '111' for emergency services, while other nations dial '999'.

In 1878 Kansas undertaker Almon Strowger believed that a switchboard operator, wife of a business rival, was diverting calls away from him to her husband's office. His response was the development of an automatic system for connecting phone calls, thus doing away with switchboard operators. His invention was ultimately purchased by the Bell Telephone company who used the concept successfully for many years.

In the mid 1970's there was a need to upgrade the country's telephone exchanges rapidly - partly to replace aging equipment, but more importantly to provide additional services.  From 1976 to 1978 the introduction of crossbar exchanges permitted STD (subscriber trunk dialing) to be provided. STD let telephone users make national and international calls without going through an operator. Crossbar gains its name from a part of its switching configuration, a matrix of vertical and horizontal metal bars which provide line connections at the crossover point dependent on the row and column of the matrix that has been selected.

The problem of having telephone poles covered in wires with one telephone line using each pair of wires was first resolved in the 1920's. The answer found was to use 'carrier' technology to take advantage of the broad bandwidth of copper wire pairs. A carrier system shifted voice channels up in frequency so they can be 'stacked' on top of each other in groups. At the other end of the line they could be unstacked back to normal voice channels.

Carrier techniques improved both the quality of the transmission and the capacity of the telephone lines.They were used on toll circuits between main centers and locally to rural automatic exchange (RAX) buildings.

An example of a carrier system is the ADSL Broadband Modem used for home computer connections. The modem (modulator - demodulator) modulates the computer signal at a frequency above normal speech frequencies. Using a small filter unit at the phone socket on the wall the computer and telephone signals (data and speech) are merged and placed on the phone line together - side by side frequency-wise. The combined signal goes to the local exchange where they split apart again for onward transmission.

In 1960 a large-capacity toll link between Auckland and Wellington was commissioned. Coaxial cable was used from Auckland to Hamilton and from Wellington to Palmerston North, with microwave channels between Hamilton and Palmerston North. The equipment kept getting upgraded but 'stacking' of voice channels and groups of channels allowed for 600 circuits, 960 circuits and finally a 140 Mbps bearer. Toll links in Southland and Otago also moved from wire-based carrier circuits to radio systems. See the Awarua - Radio Depot item in the sidebar for further information.

The many fiber-optic links now around the country also 'stack' circuits but provide significantly greater bandwidth and data rates.